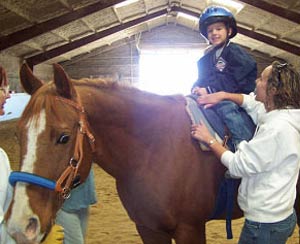 I want to share with you a testimonial story from Kathy Gray, mother of a PPTRC Rider.

My son has been diagnosed with sensory integration disorder. He is also severely speech and language delayed, and has a possible auditory processing disorder. In addition he has several characteristics of autism, though he has not been formally diagnosed with autism.

When he was two and three years old, everyone told me “all kids develop at different rates, he will be fine” or “Einstein did not talk until he was four”. Well, when he turned four years old and still only knew a few words and only very simple sentences… I decided enough was enough…I was going to take him in to get evaluated.

They found out that as a four year old, he was at a two year old level of speech development. He started speech therapy once a week. While he showed some gains, he was often distractible, had a hard time focusing, and was often out of it by the end of the session.

His therapist recommended that he try hippotherapy (therapy on horseback) as a supplement to his weekly speech therapy sessions. He started with Angela. I was immediately amazed at how much more focused and attentive he was on the horse. His progress with speech increased dramatically. He quickly learned “on”, “under”, “behind”, “in front”.

One day Angela told me my son was doing so well, she was going to move on to function of objects. If you asked my son “what do you do with a fork” he would just repeat “fork”. He did not make the proper associations. My immediate thought was “oh boy…this should be a challenge for her.”

Well I was in complete shock when she returned to the side of the area and told me “he got them all right”. I honestly thought I misheard her. It was a huge breakthrough for him. On the way home I asked my son about function and he was able to demonstrate that he retained what he had learned on horseback.

I was truly amazed. I credit Pikes Peak Therapeutic Riding Center and their Hippotherapy program for such a large part of the progress my son has made over this past year. I am not 100% sure why the therapy works, but I do know it works. Thank You PPTRC for offering such a terrific program.